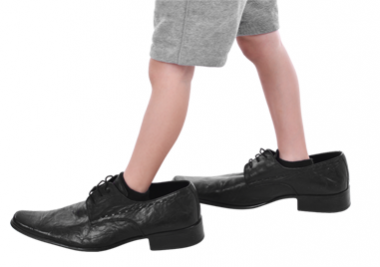 Arturo was the second of six children of Obach Josep Soler, who in 1924 opened the ”Sombrereria Obach” a hat store with his brother Victor in the Gothic Quarter of Barcelona. The family moved to live in the top floor of the store. Next door, Estanislau, his other uncle, opened another business dedicated to plastics.

The three brothers Obach Soler had returned from Iquique, in northern Chile, where they had founded with their sister Mary stores ”La Linda”, dedicated to selling clothes, shoes, household utensils ... In 1948 Arturo and Pura his new wife decided to move to Chile and continue to take over the business after the death of his aunt, but finally returned to Barcelona in October 1961, thus ending the American adventure.

When he returned to Barcelona started a shoe store ”Calzados Obach”. It was located in a place that he used to spot daily since he was a four year old kid from the balcony next door where he lived, corner of Call with Banys Nous. Until then it had been occupied by ”Peraire”, dedicated to leather goods. Having made the renovation, led by an interior architect Italo-Argentine origin, Mr. Paglia, the business opened its doors in 1962.

Arturo Obach opened a shoe store for men who sought quality and elegance. So, he quickly built a loyal clientele, other than foreigners who used to visit the city, yet far from the boom of 1992. After that some of his eight children help him during seasons, Mercedes, the last born in Chile, decided to dedicate to the business on a permanent basis with him. They worked together until August 2003, the month in which he passed away at 82 years old.

Currently, the family still works hoping to keep wearing clients from ”head to toe” at the same corners of Call Street, part of them dedicated to the hats, and other to the shoes.

Enter in our Online Shop

And discover all models of high quality footwear.

We are located in Barcelona

We use our own cookies and third parties to improve our services. If you continue browsing, we will consider that you accept its use. You can get more information or know how to change your browser settings here.